Cairo is the largest city in Egypt, with a population of 20 million. The hustle and bustle of the city is especially noticeable in the traffic, which is emphatically present in the city throughout the day and, especially during rush hours, causes complete traffic jams in the heart of Cairo. The Nile is an important river for Cairo.

Egypt’s economy depends on agriculture, media, petroleum exports and tourism. The ability of the economy to keep up with the rapidly growing population is constantly challenged, especially with problems the acquisition of arable land and the unpredictability of rainfall and the Nile. 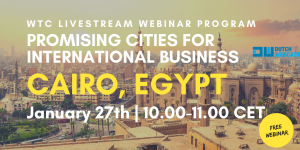 Register here for this free webinar